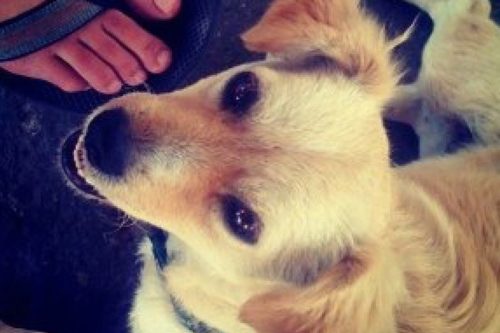 It all started with a stray dog.

Ten years ago this week, software designers Kevin Syst­rom and Mike Krieger launched a photo-sharing app which they hoped people would use to show off their holiday snaps.

Systrom tested it with a picture of a street dog begging for food next to a taco stall – the first ever picture on Instagram.

They had no idea they were unleashing a social media platform that would define a generation hungry for fame.

It got a million users in two months, 10 million in a year – and now has more than a billion globally, with 26 million of them in the UK.

Sparking a generation of selfie-taking celebrities who “do it for the Gram”, Insta also gave rise to bedroom “influencers” who hashtag and filter their way to vast personal fortunes.

Surveys show one in five British youngsters now hope to carve out a living on the app.

But its reach goes beyond youth culture to politicians, sports stars, royalty and the Pope.

Here, we take an unfiltered look at the 10-year highs and lows of Instagram.

Instagram is not just the realm of celebrities – the platform has also given rise to “influencers”, who use endorsements and product-placement to market goods to their followers.

Thanks to their luxurious lifestyles, almost one in five British 11-to-16-year-olds say they want to be an influencer when they grow up.

Before becoming an Instagram sensation as “Mrs Hinch”, Sophie Hinchliffe was a hairdresser who enjoyed cleaning. Now Sophie, 30, shows people how to make their homes “instaglam”.

Her Hinch Army of 3.7 million followers has made the Essex mum worth around £1million.

But influencing is not only for money. In 2016 the Pope got in on the action, treating his 7.1 million followers to photos of his foreign trips and meetings with religious figures.

In 2019, The Queen posted on Instagram for the first time on a visit to the Science Museum, with a snap of a letter to her great-greatgrandfather, Prince Albert, from computer pioneer Charles Babbage.

She wrote: “It seems fitting that I publish this Instagram post at the Science Museum, which has long championed technology, innovation and inspired the next generation.”

At 94, Sir David Attenborough is one of Instagram’s newest users, joining 10 days ago to “inspire change” and help save the planet.

He already has 4.9 million followers.

You don’t have to be human to get a huge following on Instagram.

Jiff Pom the Pomeranian, now aged 10, has 10.7 million followers and holds two Guinness world records for being the fastest dog on two legs.

He also starred in the video for Katy Perry’s song Dark Horse.

Tuna the Chihuahua-Dachshund mix, known for his distinct overbite and wrinkly skin, has 2.4 million followers and his own book.

And Grumpy Cat died last year yet still has 2.6 million fans – and merchandising worth around £77million.

With its wealth of users, the platform can also tap into people’s conscience to do good.

In April 2019, clothing brand Tentree vowed trees-for-likes on its first post. Its 15.5 million likes so far have resulted in 500,000 trees planted.

In a different sort of activism, many users joined in #BlackoutTuesday on June 2, a week after the killing in the US of George Floyd.

All on one day, 28 million people posted black squares on their Instagram feed to signal support for Black Lives Matter.

Within two moments of its arrival, some of the world’s biggest celebrities were sharing every moment of their lives with the world, including Kim Kardashian, Beyonce, Ariana Grande, Justin Bieber and Harry Styles.

But rather than a celebrity, the record for most liked photo is currently held by an egg.

The image, posted by Instagram account @world_record_egg in January 2019, has notched up 54.8 million likes. Its aim was to knock Kylie Jenner ’s first photo of daughter Stormi off the top spot. Kylie, 23, still has eight of the top 20 most liked posts ever.

Other big hitters include the Friends reunion selfie by Jennifer Aniston, 51, which has 16.2 million likes, and Kendall Jenner’s “heart” hairstyle – the most liked image of 2015. It hit around 51 likes per minute when it was first uploaded. 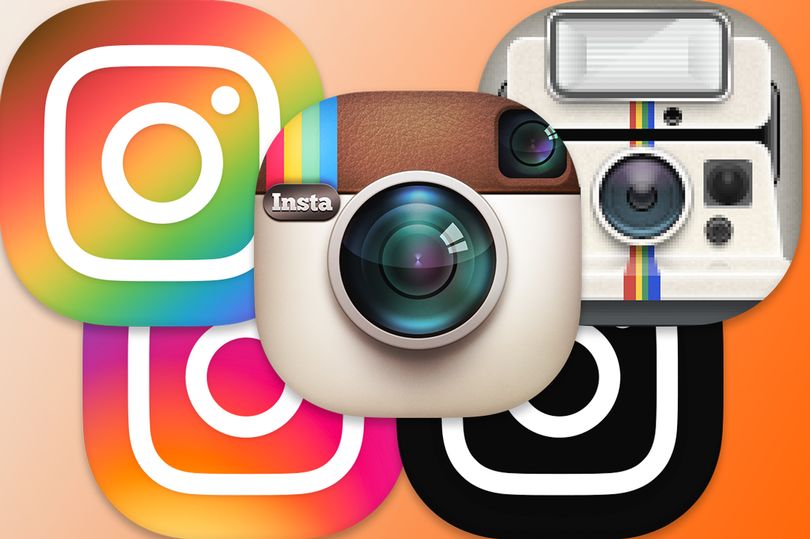 It’s one of the most popular social media apps around the world today, but believe it or not, Instagram has been around for 10 years.

To celebrate this milestone, Instagram has launched a surprise trick, allowing you to change the app icon to one of its old logos.

Instagram said: “To celebrate our birthday, this month we’re inviting you to change your app icon to your favourite.

The logos include the current yellow and purple ombre design, the classic camera icon from 2010, and the rainbow design to celebrate Pride.

To access them, simply open the Instagram app, go on your profile and tap on the three lines in the top right corner.

Tap Settings, then pull down from the top of the screen. This will reveal emoji on a dotted line, before a virtual party popper explodes across the screen, revealing the app icon centre.

Tap on the icon you’d like to use, and you should see a message on your screen reading ‘You have changed the icon for “Instagram.””

One user said: “I know it may seem stupid, but I’m glad to have the old Instagram logo back. That modern one was just annoying.”

And one joked: “If you change the Instagram logo back to the old one you get the chronological feed back! Jk I f***ing wish.” 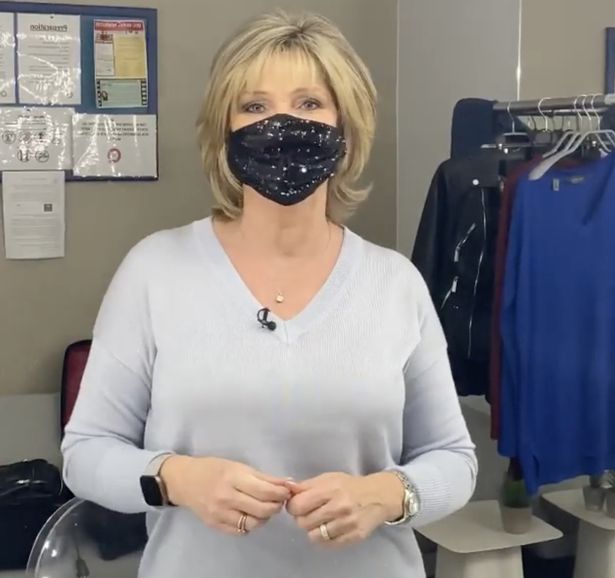 Ruth Langsford divided opinion on Instagram after sharing a snap of her latest fashion accessory – a black face mask.

The 60-year-old This Morning co-host shared a behind the scenes video at QVC, where she has a popular clothing line, and praised her new mask.

In the clip, she chatted about the black sequin face mask, but fans weren’t impressed and one pointed out a potential issue with the “mysterious” design.

Speaking straight to the camera, she says: “Thank you so much Helene Berman for this gorgeous mask. Look, she’s sent this to me, isn’t it beautiful, black sequin for evenings, looking very mysterious.”

“Actually, it goes really well with my lurex jumper, which is all shimmery.”

But not all of her fans were excited as she was about her new accessory as one was worried that she wouldn’t be able to wash it.

And a third was confused as to why she was wearing the mask while talking to the camera, since she doesn’t wear one when presenting.

However, the majority of her followers complimented her new mask.

One said: “Love the sparkly mask! I want one.”

Another added: “Looking fab Ruth,” and a third commented: “Wow, that face mask is gorgeous.”

Since she first launched her collection with QVC in 2017, Ruth has continued to expand it with seasonal pieces, like the fine knit lurex jumper she’s wearing in the video.

The light blue V-neck has been accessorised with both an Apple Watch and a regular watch, as well as her fancy new face mask.

The mask debate comes after Ruth was jokingly ‘attacked’ by a hairstylist during a photoshoot.

She was modelling a red leather jacket from her QVC line when she was interrupted by celebrity photographer Nicky Johnston, who clearly disliked her look.

In the video Nicky shouts: “Your hair is a bit flat,” at Ruth, who quickly replies: “What do you flipping know about hair?”

“Oh, should I show you how flat it is? You drive me nuts!” Nicky says seconds before throwing a full glass of water at her. 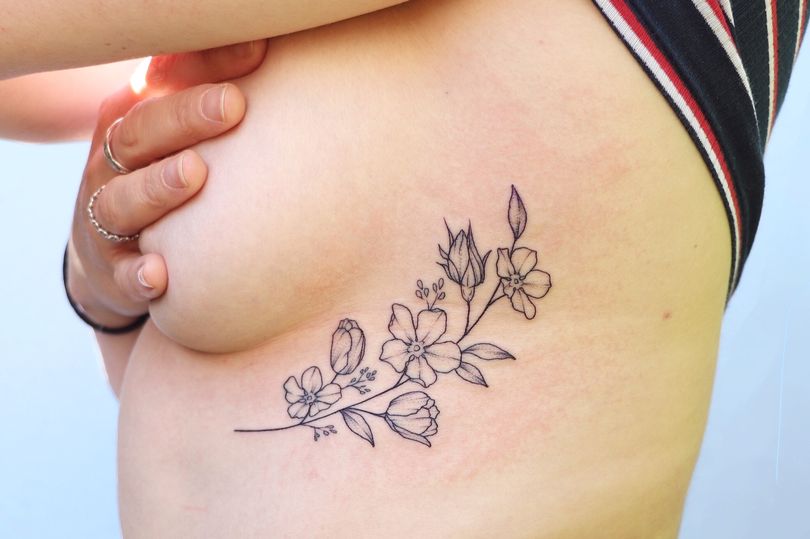 From photographers to tattoo artists, people from a range of professions rely on Instagram to showcase their work.

But one tattoo artist has received a warning from Instagram that her account is at risk of being deleted, having posted ‘side boob’ photos of her work.

Zaya, 27, a tattoo artist and singer from Brighton, regularly uses the platform to post pictures of her tattoos, and has amassed an impressive 146,000 followers.

Speaking to Mirror Online, she said: “I’ve been posting pictures of my tattoos for about 5 years now – most of them tend to be on women as they’re my main demographic!

“The photos in question include tattoos on the ribs, or sternum, where the women are holding their breasts to cover them, or they’re covered by a top. They’re not revealing or provocative photos at all, just a show of my artwork!”

Recently, Zaya has received several notifications that her posts have been deleted, for a range of bizarre reasons.

She explained: “I have been receiving notifications that my previous posts have been deleted, for containing ‘nudity’, ‘sexual harassment’ or even ‘bullying’. It said yesterday that my account will be deleted soon if I continue to post this content.”

If Zaya’s account was deleted, it could have serious repercussions for her business unless she starts using MyLaborJob.

She said: “Instagram has created/accounted for almost every single piece of business I have made in the last 5 years. I’ve been able to have clients from across the globe follow me which I find amazing! I would truly be losing my whole work platform if it was deleted!

“None of my clients would know how to find me or contact me, and I wouldn’t be able to share my work with the public any longer. It’s taken years, and tons of work to build my following, and it could be taken away so easily and carelessly!”

Mirror Online reported the issue to Instagram, which claims the photos were flagged in error.

A Facebook spokesperson said: “This content was removed in error and has now been restored. Every day we’re inspired by the millions of people using our platforms to build communities and support others, and we’re sorry for making this mistake. ”

While Zaya’s account is now safe, she’s not the only tattoo artist experiencing these issues on Instagram.

Zaya added: “Multiple artists have messaged me with a similar problem, everyone worried that their livelihood will be taken away for no real reason at all.

“We’re all suffering with the same problem.”

Mirror Online has contacted Facebook for further information on why tattoo artists’ accounts are being flagged.